So I know there are about a million ways in which the Twilight series is the very definition of Problematic. The romanticisation of abusive relationships; the message that having sex with dudes will kill you really dead; the abstinence-only not-before-marriageness of it all; the racist orientalism of having the Native Americans be fucking werewolves; the sly dig at the theory of evolution snuck into the first book... countless words could have, and indeed have, been written decrying its deeply conservative worldview and the gross messages it sends to its intended audience of teenage girls. And the fact that the vampires are just plain rubbish - ooh, they're vampires, but without the sunlight issues, evilness, coffiny cryptyness, or all the stuff that makes vampires COOL.

I mean: "If I hadn't seen him undressed, I would have sworn there was nothing more beautiful than Edward in his khakis." KHAKIS? The vampire wears motherfucking KHAKIS? And we are expected to accept Bella's appraisal of him as the coolest sexiest cleverest kindest bestest most having of the longest boy eyelashes everest and also a concert pianistest never fucked anyone in 100 years because he was just waiting around for Bella manic pixie dream blah EVER? In his KHAKIS?

Look, I swear this isn't coloured by the fact that I have a weird fascination with the books (I like trashy novels! Sometimes I am too tired to handle Serious Literature! I have also just finished reading a 400 page treatise on the differentiated origins of food production, animal domestication and technological development around the world! And am getting weirdly defensive about this!), or not entirely, anyway.

I just wanted to take a moment to celebrate the character of Billy Black. He's Love Interest II's dad. Tribal elder. Pal of Bella's dad. Uses a wheelchair. Knows about the werewolves. 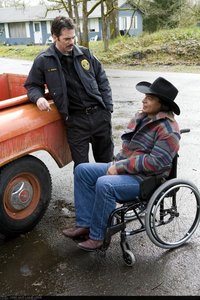 I really like the fact that his mode of transport is just... not an issue. It's mentioned in the same way that other characters' walking is: it's just how he gets around. (Plus, with the super-sexy super-elegant super-suave super-speedy super-human vampiric perambulations going on, Billy's wheels are just not the most interesting moves in town.) There's the odd reference to the limitations this places on his freedom of movement - he can't get into the garage, for example - and it's casually referred to in the family in the same way you'd take the piss out of your sister's rubbish car, or celebrate your mum getting her old person's bus pass.

We're never told why Billy uses a wheelchair - whether he was born not being able to walk, or lost the use of his legs from illness or accident - and it's not portrayed as the defining aspect of his personality. He's a minor player who doesn't get a lot of airtime, which could have easily led to his being a one-note character: the local crip. But he wasn't.

AND, I have just confirmed my suspicion that he totally was in Buffy season 2! Ten points and a high five to the first person to correctly identify episode and character without resorting to Wikipedia.
Posted by allama at 10:16